I was thinking about the song “The Gambler” today. Specifically:

And I realized that’s a writing life.

I wrote my first official novel when I was about 15. Long hand, on looseleaf notebook paper. Must’ve been about 100 sheets, back and front. It was a fantasy, in the spec fic vein, because I was (and still am, to a certain extent) a sci fi/fantasy geek. That was my first completed novel-length work.

An equally atrocious sequel followed, same method, as soon as I finished the first. I think I may still have them somewhere. I didn’t finish the sequel, as I recall, but I got about halfway through.

I wrote longhand for years. I came of age before a computer was in every house, and our typewriter was for “official” use). Back then, I wore out Bic ballpoint pens (I prefer black) and used up whole packages of looseleaf notebook paper. I cultivated an all-caps style in high school for formal writing, though I slipped easily into an upright cursive scrawl if I needed to write something fast or I was working on a research project and taking notes in the library. I still use both styles when I write longhand, something I still do because I send actual cards and postcards to people and I do take notes longhand when I’m working on projects. 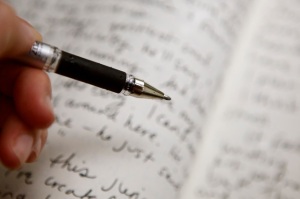 When I went to college, personal computers were still a luxury for a lot of us, so I used a big, clunky typewriter with correcto-tape. I bought far more spools of correcto-tape than ribbons, especially when I worked on my class papers. I started another novel, but about halfway through, school interfered. Then I started another novel. But classwork, again, got in the way.

But I held onto those manuscripts.

I then wrote a few short stories, still in the spec fic genre, and I started writing poetry, which I included in my journals. When I journal, it’s always by hand. So, too, is my poetry. I always write poems longhand first, scratching things out on the page, adding things here and there, trying different structures. A few of my poems have been published over the years, but mostly they’re exercises in word and rhythm, in how something sounds and feels, in images and evocation.

I didn’t start writing another novel until I was a grad student working on a master’s degree in anthropology. That was the first novel I typed — still no computer, though my typewriter then had some word processing capability. I didn’t finish that one, either, but I did write a few more spec fic short stories and submit them for consideration in anthologies. They were all rejected.

At that point, I folded.

So I wrote more poems instead, and kept them as exercises in my journals.

Three years later, I again started writing a novel, but I went back to the basics. Bic pen (black ink) and looseleaf paper. This one was a mystery and I didn’t finish it, either.

About ten years later, that handwritten pile of whatever it was I started before I walked away would become a very loose basis for my first published novel. I had written and completed two novels prior to getting that one published. Both were based on those novels I had started in college and grad school, respectively, and it felt cool, to complete them though they’re just hard drive bookends now.

Writing is fitful. Writing is shitful. But it has to be, because in order to find those new levels and break through whatever stale blockages we’ve got stored up in our deep-downs, we sometimes have to just stop. Children’s author Robin LaFevers said today in a blog at Writer Unboxed that

Rejections, bad reviews, lackluster sales, painful critique feedback, are all necessary lumps on the road to our objective. Then we need to be humble enough to hear what that feedback is telling us. Sometimes the feedback won’t be the obvious kind—a rejection or editorial letter—but rather simply not making progress on our journey. Keep your eyes peeled for that kind of subtle hint the Universe likes to taunt us with.

Been there. Done that.

And no doubt will again. The stretches of time that mark my walks (or sprints) away from writing are my fallow seasons, when I let the soil rejuvenate and plant poems elsewhere, tending them as they grow and letting words sift through my fingers like the dirt I left in the other field. I pull a journal out, reach for a pen, and plow new lines across the pages. There’s something earthy about writing by hand, something intimate and deep, and it triggers parts of my brain that were also lying fallow and suddenly feel the stirring of new growth.

And apologies to Don Schlitz, “The Gambler” songwriter, and Kenny Rogers, who sings it far better than I. (Go ahead. Sing along.)

4 thoughts on “A writing life”