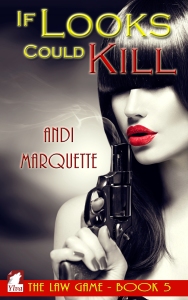 If Looks Could Kill is the fifth and final installment of The Law Game.

Eleanor “Ellie” O’Donnell is part of a special investigative unit within the New York City Police Department. Her latest assignment has her tasked with uncovering the relationship between internationally known fashion mogul and all-around ice queen Marya Hampstead and a local Russian crime family. As legendary for her business acumen and beauty as her uncompromising and unapproachable personality, Marya Hampstead is not a woman to cross.

Unfortunately for Ellie, the only way she can get close enough to conduct her investigation is by pretending to be an aspiring designer who takes an internship at Hampstead’s company. Definitely out of her element, Ellie has to put all her acting and investigative skills to work as she delves into what at first seems a simple case of occasional public outings with a man whose family has ties Hampstead might not know about.

But when Marya’s father, an international businessman, shows up in New York, it becomes clear that something else is going on, and that there’s much more to Marya Hampstead than meets the eye. The question is, how much more and how deep is Ellie willing to go to find out?

In the fast-paced world of clothes, critics, and competition, Ellie uncovers a lot more than runway gossip, including secrets that will kill far more than a bad outfit.

My Tweets
Join 3,330 other followers