So, I was thinking about the history of sleuthing/detecting in fiction/literature and I decided to do some digging. I’d heard of Anna Katherine Green, and I’d heard about her character, Violet Strange, who’s credited as the first female sleuth in fiction.

But Green is also known as the mother of American mystery, and she’s credited as writing and publishing what’s known as the first American detective novel, The Leavenworth Case, in 1878 (image below). It’s available at Amazon, if you’re interested (reprinted, obviously). This book, featuring detective Ebenezer Gryce, was published nine years before the debut of Sherlock Holmes. 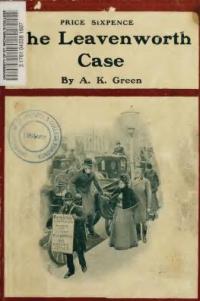 Sir Arthur Conan Doyle was a fan of Green’s, and he corresponded with her while building his own career and Agatha Christie, as writer/screenwriter/director C. Martinelli points out, wrote in her autobiography that Green inspired her to write mysteries. Martinelli has lots of great info about Green, and has adapted some of her stories to a television serial. You can contact Martinelli directly from the blog. Check out that blog here.

The book became enormously popular almost overnight after its publication by G.P. Putnam and Sons. This was America’s first bestselling novel: 750,000 copies in 15 years, according to Martinelli. A discussion of the book appeared in the Congressional Record, where it was concluded that it was impossible that a woman had written a book so accurate in its legal proceedings. Green continued writing, and published novels, short stories, and short story collections just about every year for 50 years. Her novels are known, as Martinelli says, “for their tight construction, ingenious plots, puzzles, the gradual uncovering of clues, detection by professional and amateur detectives, strong characterizations, and a strong grasp of the law and human nature”. (Source — “The Gilded Age Mysteries: Violet Strange, a Girl Detective,” May 4, 2012)

Martinelli further points out that Green was college-educated, she earned a living as a bestselling author for 50 years, and married for love. All things that women rarely did or could do in that era.

Here’s Martinelli on Green’s work and adapting her stories to screenplay:

Green’s novels are often long by today’s standards for detective fiction. They are set in an era very different from our own and written in the style of that earlier era. They often include flashback sequences in the middle or near the end of many of the novels, during which the motive for the crime is explained. All these points make adaptations of her novels a challenge.

Her short stories are better suited to adaptation. But only the collection I chose to adapt, The Golden Slipper and Other Problems for Violet Strange, features one detective throughout the various stories. The main character, Violet Strange, arcs emotionally during each of her investigations to a certain extent, and over the course of all her investigations to a much greater extent, adding interest to the series.

But the main reason I adapted The Golden Slipper and Other Problems for Violet Strange is because I enjoyed reading it, immensely. I found it engaging and entertaining, and at times moving, romantic, nostalgic and exciting.
[source: C. Martinelli’s blog]

So if you’re interested in Green’s work, hit that Amazon link above. Or see what you can dig up from Project Gutenberg, which offers some of her works online (it’s public domain now, so it’s legal). This handy link provides other links to Green’s work at Project Gutenberg.

Other info on Green:
Biography and bibliography
Manybooks has free downloads of her work (legal — it’s public domain), but here’s a little critique about using Manybooks, in terms of text and formatting.
And here’s Sisters in Crime on Anna Katherine Green.

My Tweets
Join 3,330 other followers