Hi, all! Hope everyone is having an awesome holiday season. The new year is fast upon us, and I sure hope everyone finds some joy in the upcoming seasons and that you’re able to accomplish your goals.

I’m waxing a bit pensive on a Saturday.

I was having a conversation with some of my female academic colleagues last week and one of them (I’ll call her X) brought up something that I’m sure may resonate with some of you, though perhaps you hadn’t really considered it or unpacked it.

X does a lot of research in her fields, and she sometimes gets requests from grad students who are working in the same fields. That’s standard academic networking. It’s perfectly reasonable for grad students to contact professors and/or researchers with questions about their work, regardless of where in the world said professor/researcher is.

At any rate, X responded to this graduate student, who is male (let’s call him Y). He had said that he was a doctoral candidate, which means he’s not a full Ph.D. yet and in academese, that means he’s not yet earned the title of “Doctor of Philosophy,” which gets shortened to “Dr.” No, it doesn’t mean you’re an actual medical doctor. But in the hidebound halls of academia, it’s a title that carries weight, because it means you’ve completed the rigors of graduate school and written your dissertation and successfully defended it. A dissertation, for those not in the know, is a book-length manuscript based on your own research and hypothesis.

This is no small feat. It’s often a lot of years of hard work, often balanced with your other life or lives. Grad school is sort of like academic boot camp, and it tears you down in many different ways. It re-shapes you, it forces you to think in different ways, but it ironically also enforces certain stereotypes. For those of you who assume that academia is some bastion of liberal and progressive thought, sorry. It’s not. It is often inflexible, hierarchical, and full of the -isms that you assume don’t exist there. It’s hard work, especially if you’re LGBT, a woman, if you’re not white. But those, my friends, are conversations for another day.

Back to the story.

So, because Y is not yet a full doctorate with title rights, if you will, X responded to him in her professional way by calling him “Mr.” + [last name] since an M.A. degree doesn’t grant the title “Master.” Fortunately. Cuz that sounds creepy.

With me so far? Okay. Carry on.

As you navigate the world, some habits should not die. In many circles and contexts, those habits include referring to people to whom you have not been introduced by a title and surname. I learned that habit as a child. I never presume familiarity unless the other party to whom I’ve been introduced tells me to call him or her by a specific name sans title.

This habit demonstrates to the person I’m addressing that I am not one to make presumptions or assumptions about his or her “station in life” and that I am attempting to establish equal and hopefully mutually respectful footing between us in the use of formality. It demonstrates that I am providing to this person a measure of formality and respect to privacy and leaving the person a choice as to whether or not he or she will grant me further familiarity.

I have also established an early, professional boundary when I use a title with someone. And it demonstrates that I expect the same professionalism in response.

Some people obviously don’t grant you that level of familiarity, and that’s fine. That’s their prerogative, if they wish to maintain formality. But others violate that early boundary you set. Intentional or not, it’s a breach of etiquette and can say other things about how the other person perceives power and wishes to wield it.

Y responded to X, but he called her by her first name only. Keep in mind these two people have never been formally introduced. X used the title “Mr.” in her response to him because she is recognizing a professional level of interaction and establishing that as a ground rule. Which Y broke.

Y is, after all, also fully aware that X is a full Ph.D. He has read her books and articles, after all, and she is currently a high-ranking academic-type official. In other words, there’s no way he doesn’t know what her title is.

Yet he did not use it, which is — at least in academia — unprofessional at the very least, and rude. But it also carries another meaning, and that’s something else my colleagues and I were talking about.

If X had been a man, Y most likely would have used his title, which is “Dr.” Y didn’t even deign to refer to X as “Ms.” No, he went straight for the first name only.

Now, perhaps there’s a generational thing going on here. X is in her late 40s and Y is probably in his late 20s. For older generations — ESPECIALLY those in the tightly wound hallowed halls of stodgy academia (and I say this with affection, since I, too, was an academic) — titles mean something and they indicate not only something about the person who bears the title, but also about the person who uses it or doesn’t.

Titles are not just a recognition of the work that you have done to achieve your position/status in academia. They are also indicators of manners and professionalism on the part of those who use them.

Y doesn’t know X. He’s never met her. But he’s read her work and he admires it. Yet he refused to call her by her title and instead presumed a familiarity with her that she certainly did not grant.

X was irritated by this breach of etiquette, but more importantly, she recognized it for what it could also be, because we all realized that chances were, had X been male, Y would most certainly have used her title and would never have considered taking such a liberty as a first-name basis with her. Because that’s what he did. He took a liberty that he most certainly was not granted. 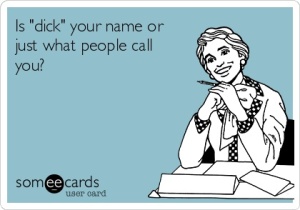 Another colleague who was engaged in the discussion noted that this happens all the time to her (she’s a full professor and the head of a department), where male graduate students will contact her with questions about her work and they will address her by her first name only.

I recently addressed the gender of language in a post I did about cursing. There’s an assumption that women shouldn’t (and don’t) swear, and if they do, it’s because they’re somehow “bad” woman.

How language is used, as much as what is said, can denote power and/or attempts to take power and establish dominance. This is as old as language, friends. We all operate within social hierarchies, sadly. Using a title with someone you don’t know is a way to establish mutually respectful footing, as well as to maintain certain boundaries. But when someone breaches that boundary and appropriates an intimacy with you that you did not invite, it’s kind of creepy and, in some contexts, it’s a power-grab.

As we talked about this incident, X didn’t think that Y deliberately set out to undermine her authority by using her first name only. But somewhere along the line, he’d learned that it was okay to do that, and to presume a familiarity that she did not invite. Perhaps it’s the anonymity of the Internet, “democratizing” everyone. But we’ve seen how the internet is wielded against women and others who are traditionally marginalized.

And if you think about it, it’s also just plain bad manners to assume a familiarity that you have not been granted.

The point here is, whether you’re male or female, do not presume that you can just randomly call people by their first names in unfamiliar contexts. Especially if the person you’re meeting is maybe older and has certain expectations regarding social niceties and/or is someone whose expertise you are seeking. In terms of academia, as John Garger noted in 2013 at BrightHub, “The one rule you should always remember when addressing someone who has completed the study and research necessary to be called Dr is assume a formal address unless otherwise directed by the individual.”

Neuroscientist and Lecturer Tom Harley over at his blog, Thermaltoy, did a survey about proper email etiquette to academics. He discovered that the majority agreed that using a title is a good professional approach. One commenter noted, “… an incorrect approach just reads as slapdash and lazy – not the kind of impression you want to make” while another said, “I’m not offended by over-familiar language, but it makes me think twice about the student/applicant — it suggests to me that they’re not taking the email exchange/position advertised seriously, and THAT is what concerns me.”

In other words, if you’re seeking someone’s expertise, maintain professionalism, and establish that boundary early. Most people will let you know whether they prefer a title or not. And many people who carry a title and prefer professional distance will also address you respectfully, as well, and use something like “Ms.” or “Mr.” if you’re, say, still a grad student and don’t have any other titles.

Etiquette, in other words, is about coming across in certain ways and also about respecting the other person’s autonomy in the world and not breaching boundaries over which you have not been invited.

On titles, via Emily Post
Robert Hickey (who is, like, MR. Protocol) on titles
Good post on the inappropriateness of what Y did
Good tips for writing emails to academics (can be extrapolated to others)
More on that

On the less-than-liberal/progressive halls of academia:
Stories by women academics
In science
More on science and academia
Students more likely to give male online professors better reviews than female
Writing about sexism in academia
On language and power
Language and gender
Brief piece in The Guardian about how students of different backgrounds learn the language of bullying.
Racism in academia
Book review about women of color in academia (facing both sexism and racism)
On racism and sexism in academia

Heh. More than you needed to know, right? 😀

My Tweets
Join 3,330 other subscribers