HAI, FRENZ! Welcome to this here whistlestop on the KD Williamson blog tour! We’re celebrating the release of her latest F/F romance, Big Girl Pill, and that involves giveaways and blogs and happy fun times! WOOOOO! See below for the schedule and for the giveaway deets! 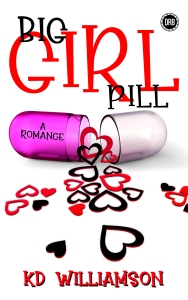 Maya Davis is done hiding. It’s left her empty and out of touch with her family. Now she’s a young woman on a mission: getting rid of residual feelings for her former best friend from college. Her plan is to put herself through a wringer by being in Nina’s upcoming wedding and burning away whatever emotions are left, so she can start anew. Her plan, however, has big holes, and everything she’s been feeling rushes through and leaves her thinking that this was a bad idea.

Nina Sterling is a work in progress, torn between being two very different things—the person others expect her to be and who she wants to become. For the past couple of years, it’s been easier to give in toher demanding, steamroller of a mother and her pleasant but controlling fiancé, but with Maya’s return for a lengthy stay in town, and encouragement from Nina’s hilarious cousin, seeds of rebellion are sown.

As Maya and Nina try to patch up the past and get closer, old sparks rekindle, and as they both grow into who they are meant to be, those sparks might just become a fire. 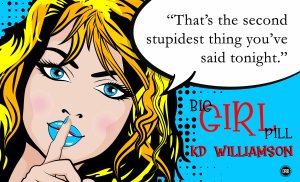 And now, I’ll leave it to KD. Thanks for joining us. 🙂

I don’t write about black people simply because I’m black. That’s only one reason. Having a degree in literature has made me privy to some incredible books and epic poems, but I also got the chance to see a huge selection of harmful tropes and stereotypes about women and about people of color. I told myself that if I ever got to really write I’d do my best to educate and illuminate that POC, especially, are not “other”. Our experiences are similar. Our lives are similar, and I think I really got to showcase that in my latest novel, Big Girl Pill.

Family as a concept has a huge role in this book. As one family comes together, the other disintegrates. I delve into the importance of loyalty, communication, empathy and caring, which are things most of us strive for in family life. Just because Maya’s family is black and non-traditional doesn’t make that any different. They are flawed, but they don’t have to be broken. They laugh. They try to be there for each other and they try to be honest.

Sound familiar? Nothing “other” and unrelatable about that.

On the flip side is Nina Sterling’s experience, which is completely opposite from Maya’s. Nina doesn’t find strength in that bond. Instead, there’s toxicity. It takes her a while to really see that, but she’s young. Give her a break, yes? Still, she forges ahead and unconsciously forms something completely new for herself, which does indeed lift her up. In other words, they both pretty much strive for the same thing as they move closer toward each other. I mean, it is a romance after all.

So, what I’m trying to say is take away our skin suits and we’re pretty much the same and want the same things. Some may go after it differently, but that’s an individual thing, not a race thing.

How about we just read romance and enjoy?

KD Williamson is a Southerner and a former nomad, taking up residence in the Mid-West, east coast, and New Orleans over the years. She was a Hurricane Katrina survivor displaced to the mountains of North Carolina but has since found her way back to Louisiana where she lives with her wife and the most horribly spoiled pets in history.

She enjoys all things geek from video games to super heroes. KD is a veteran in the mental health field where she works with children and their families. She discovered writing as a teenager with the help of her English teacher, whom she had a huge crush on. With her teacher’s help, KD wrote her first short story but afterward had a hard time finding inspiration. Years later, writing fanfic became her gateway into lesbian fiction.

—
Indeed! How about a giveaway? Hit the link to get all signed up.

My Tweets
Join 3,330 other subscribers