Hi, all! Hope the weekend treats you well.

I decided — after some comments (some cranky; others not so much) I got regarding my decision to reboot my first mystery, Land of Entrapment — that it might be a good idea to explain what a new edition is and why some authors decide to do it.

There are many reasons authors come to these decisions. We don’t wake up one day and decide, “Oh! I’m going to re-do one of my earlier works and re-issue it! Won’t that be fun?” Because not. It’s not fun. I mean, some of it is. But for the most part, it’s stressful and time-consuming and the longer the book stays off the market, the less opportunity there is for readers to read it. And authors never make this decision to piss people off. Trust me on this.

So let’s chat about some of the reasons authors decide to create a new edition of an earlier work.

The book was published with a traditional house and the contract is due to expire.

This is one of the primary reasons authors do new editions. When a book is published with a traditional publishing house, there’s usually a set term that the publisher has to legally publish all incarnations of that book. In many cases, it’s a number of years. Well, a lot can happen in those years, one of the most obvious being, hopefully, that you the author get better at your craft.

So your contract term is coming up on expiration and you have a decision to make. Depending on the terms of the contract, you can either renew the publication with the house for another year (once the original terms expire, many houses offer a year-to-year option) OR you can get your rights to the book back.

In the case of Land of Entrapment, that is a book that was originally published with a traditional house. Consequently, when its contract got close to expiration, I decided not to renew with that publishing house.

Why does an author decide to do this?

Well, there are also any number of reasons for that. Some authors want to self-publish more, and doing that with a spiffed-up older work is a good way to get started (if you haven’t already) or continue in that vein. When Land was first published, there weren’t nearly as many options available to authors as there are now. Many authors thus see a contract expiration as an opportunity to grow as an author/publisher. It’s a lot of work, but many of us are excited about the prospect (even the non-fun parts).

Others, meanwhile, maybe aren’t happy at a publishing house but they can’t leave because of contractual obligations. So when a contract expires, those authors are only too happy to take their rights back and either find another publishing house that is willing to republish the work or they decide to self-publish it. Even for these authors, getting their rights back and republishing is another way to grow as an author/publisher (if they decide to self-publish).

And still other authors have to republish because maybe something happens to a publishing house and it closes down. Some of you may remember the tragic death of Roxanne Jones, who headed L-Book. All of those authors had to find other ways to get their work back on the market. Others may remember Blue Feather Books, which closed last year. All of those authors, too, had to find other ways to get their books back on the market. Some moved to other houses and others opened their own ventures.

Does a book stay on the market when an author’s rights revert from a traditional publishing house?

No. That’s why an author has to publish a new edition. Because that book is not generating any income for a writer and if it’s part of a series, as Land is, that can create problems for readers who get interested in that series. Once a contract expires, the publishing house that published it no longer has the legal right to publish any edition (whether it’s print or ebook) of it (unless the author and the publisher come to some agreement about it). In my case, Land is off the market as a new book and as an ebook. And I want to get it back onto the market. It makes it easier on the series and easier on readers to do that.

Why some authors have to re-write an older book

Okay, so now I have the rights to Land of Entrapment and I want to get it back on the market. Yay, me! Yay, readers!

Hold on there, buckaroo. There are some things I have to do.

Some houses get really cranky, thus, about authors re-publishing a book that hasn’t undergone a re-write and a new edit, because it’s basically a product that they had on the market that was created through channels in that house. They created it, but they no longer are able to generate anything from it, and they may claim a certain “ownership” of that version that was originally published through their house.

Other houses are more lenient in this respect. That’s why you need to make sure you know what the house expects once a book is released back to you so that you can then proceed with your new edition. If I wanted to just republish what the original house had already published, I would have to purchase the rights to do that and if the book is almost a decade old (as Land is), it seems a better thing to do is to strengthen the writing in the older version and thus create a new edition. 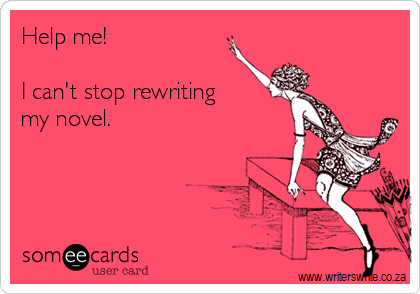 In my case, the manuscript for Land thus has to go through a new edit, a new typeset, and a new e-file generation process. Since it’ll be going through another editor, that means I need to work on the manuscript anyway. Land was my first published novel. I wrote it almost ten years ago. I like to think that I’m a better writer now, and that I can make the narrative tighter and flow better in a second edition. I may remove some scenes, re-tool them, and possibly add some scenes. What I will not do is change the intrinsic integrity of the story or the characters.

Why a new edition generally gets a new cover

In some situations, the cover of an old edition is owned by the house that published it, so an author doesn’t have rights to that cover. In other cases, if an author does actually own rights to the cover, the author will make it look different as an obvious way for readers to know that it’s a different edition.

Think about JM Redmann‘s work. The first Micky Knight mystery she wrote (Death by the Riverside) has seven editions. All with different covers. Each publisher, after all, wants a unique look for that book to demonstrate its own style and to signal readers that the book is now being published with a new house and that it’s a newer edition. Or, as in the case of that Micky Knight #1, foreign-language editions put different covers onto works.

So Land will be getting a different cover, too. And that’s fine. Remember, the first print edition of Land will still be available on the used book market. So there will still be books circulating with the original cover, but the new edition that I’ll be selling will have a different one. After all, an author who is thinking about self-publishing a reprint wants a new cover to signal that it is, in fact, a new edition and to maybe update the look in accordance with current cover trends.

Yes. And some are able to self-publish one edition of the book while a traditional house publishes another edition. Some decide that a book they published a few years ago needs a makeover for whatever reasons. Maybe they’re better writers now. Maybe they want a new cover. Most self-published authors will update a book for many of the same reasons traditionally published authors do (minus the contract expiration issues). Sometimes a self-published work garners so much interest and popularity that a traditional house approaches the author about publishing that work or distributing it. This happened to sci fi writer Hugh Howey, whose online series exploded and he was basically able to write his own ticket with a big house. Simon & Schuster created a print version of his books and distributes them, but he retains ebook rights.

So Andi, why are you doing a new edition?

As I noted above, Land was published with a traditional house and the contract expired. I decided not to renew with the house and instead put Land through an update. Keep in mind I have to create a different version (however slightly different or not) and put it through another edit and new typesetting and all of that in order to ensure that I’m not stepping on the toes of the original publisher.

Why didn’t you just buy a reprint license?

Well, those can be expensive. And in this case, I decided that re-doing Land is the best course of action because I actually need to bring it and the other early books into accordance with current events.

What do you mean by that?

A series has a weird space-time continuum. For the characters in a series, it may only be a few months of time that has passed. But for the writer, it may be a year or two or even more between books. Which means a writer is basically confronted with writing historical fiction if she wants to keep the series “contemporary” within the original time frame set by the earlier books.

I wrote Land in 2006-2007. Because the main characters are LGBT, I include references to current events contemporary to those characters. Well, marriage equality came to New Mexico in 2013. That means the characters will be discussing that issue in forthcoming books. HOWEVER, if we go by the timeline set in the books, book 5 will take place in 2008-2009. That’s basically historical fiction, and it means that I don’t get to discuss marriage equality in New Mexico for 4 years in book time. That could be anywhere from 4-8 books and by the time the characters actually get to 2013, it may be 2020 in real time.

Is your head exploding yet? Mine, too.

Anyway, I thus prefer to update the timeline a bit (and the technology a little) in Land (and soon, State of Denial) so that I can use the changes that have occurred politically and socially in the storylines for books 5 and 6 and beyond.

What else will change?

The writing will be stronger, smoother, and even tighter (hopefully–heh!). I may remove some scenes but add others that will help with stronger characterization, dialogue, and pacing. I will probably re-write some parts of some scenes to do that, too.

There will also be some slight technology updates. Remember, I wrote Land in 2006-2007. I’m going to move the timeline a few years forward and that means the technology needs to reflect that.

Most of the changes will be subtle. But the fact remains that in order to get this book back on the market, I HAVE to create a different version than the one that was previously published. Because it’s part of a series, I need to ensure that the books in that series are available in print and ebook so readers who have not yet discovered it won’t be wondering what the hell is wrong with the series that only 2 or 3 books are available in it, and why there aren’t any ebooks of some of them available.

So I do apologize for the inconvenience this may create. Those of you who have already read the book, thank you. I wouldn’t be writing without you.

Regardless, I hope you stick around for the results.

6 thoughts on “Why the hell are you writing a new edition?”