And I love me some peanuts!

So here we go, people. Questions people asked me on Facebook.

Daniela:
“What is the most crazy thing you ever did…and why?”
Gurrrrrrrl, there is no way I can answer this with just one crazy thing. And sometimes, it’s not like I planned to do crazy things. Crazy things just kind of happened. And my definition of crazy might not be somebody else’s definition. So here, I’ll share 3 weird incidents:
1. Walked across the border from San Diego, California into Tijuana, Mexico with friends one night. Went bar-hopping then came back and got caught in the middle of a fight between a group of Mexican guys and American frat dudes at the border crossing. I was the mostly sober one, so I had to maneuver a bunch of drunks through that hot mess. I’m pleased to say we made it pretty much unscathed. Why did I do that? Cuz it seemed like a good idea at the time. LOL

2. Got stuck on the island of Lesvos (Lesbos, people) for a week. No place to stay in town, so I lived on the beach instead in this cheap-ass tent I and a friend managed to score in this weird little store. After a week, I managed to catch a ferry back to Athens, but I left the tent with my friend and she went on to Mykonos with it. Why? Hell, it was Greece! Who WOULDN’T want to live on a beach for a week there?

3. Drove to New Orleans from Denver with a group of friends non-stop for Mardi Gras. It took us about 18 hours one way driving in shifts. We’d all pitched in to rent a place in the French Quarter. I slept on the floor all three nights but hey, it was Mardi Gras. Why? Two words: Mardi. Gras. 😀

Suzanne:
“Why is New Mexico “the land of enchantment”? Or really entrapment?”
Those of us who are New Mexicans really can’t explain this to someone who’s never been. Trust me on this, people who have not been. It’s the Land of Enchantment because it’s like no place you’ve ever been. It’s where the past has melded with the present in this really awesome blend of cultures and customs across high desert landscapes of such preternatural beauty that you can’t believe you’re on Earth.

It’s the Land of Entrapment because really, once you go, it’s extremely difficult to leave and when you do, you miss it constantly.

Kaysi:
“Have you ever worn a flannel shirt with matching argyle socks and birkenstocks?”
I have, indeed, worn a flannel shirt with Birkenstocks. However, I do not wear such an ensemble with argyle socks. Rather, in the winter, I wear my Birks with thick hiking socks. And if all of y’all must know, I have one pair of Birks, the Arizonas. I have worn them for 10 years, just getting them re-soled about every 3 years. Oh, and my middle name is Hermione. (not really, but wouldn’t it be kind of cool?)

Emily:
“What is wrong with people?”
Gurl, if we knew that, we’d solve all the world’s problems. I’m thinking part of it might be more legal pot and craft brewing and distilling for all. Plus neighborhood community centers that had great day care for working parents, national Hawaiian Shirt Days once a month, more telecommuting, health insurance for all, cheap higher education, and casual Fridays every day.

Joan:
Would you pay $200 for a pair of jeans? Or even $50? What do you think of Crocs footwear? (There’s only one correct answer.) Who has more gray hair, you or me? I’ll bet it’s you because I dye mine. Finally, and most importantly, what is your secret? You are so much more productive than any other writer I know, by which I mean me. I want to be as productive as you are. Vitamins? A tonic? Electromagnetic socks? What?!

Crocs: ugh. I owned one pair once. I’ll just take responsibility for that right now. They were red. And they were good for dog walking in Nashville, because the grass was often wet in the spring mornings. But yes, they started to reek. And that’s when I put them out of my misery.

More gray hair: Probably me. I stopped highlighting my hair in 2008 because it cost too much to do that in the recession. So now I have “recession” highlights (i.e. gray).

My secret: A vitamin tonic that I strain through electromagnetic socks. It contains glitter from sparkle ponies and the hair of a unicorn.

PAGE:
“Marshmallows. Where do they come from?”
DO NOT THINK ABOUT MARSHMALLOWS.

Karelia Stetz-Waters
“Why is the song ‘Wonderwall’ so great …even though the Wonderwall was just an old school LCD projector?”
The song is way better than those projectors because the song only lasts about 4 minutes while it took about 10 times that to actually get a wonderwall to work.

Yeah, yeah. I know. It’s Sunday and I’m supposed to be resting.

NOT! Day of rest? WTF? Clearly somebody who wasn’t a writer started that meme.

So here’s my tongue-in-cheek list of things that might make writers insecure. I mean, beyond the usual “OMG I TOTALLY SUCK AT THIS WHY AM I WRITING THIS IS POO” angst. As we all know, many creative-types (whether you write, paint, sculpt, do music or whatever it is) are a bit on the sensitive side. Which is actually contradictory, because we’re putting things out into the public world for people to look at, which invariably will draw critics who will smash our sensitive sides into quivering piles of angst, whether they have valid points or not. So on the one hand, here we are all sensitive about what we’re doing and yet we put it out there for lambasting. I haven’t figured out that contradiction, yet. Maybe it’s a type of sickness. Regardless, there are things that just make people who work in creative fields get their insecurities all up in a twist. These are some of them, but most of us won’t tell you that. So here I am, gossip-mongering. 😀

1. Getting ready to release a book just a few weeks after a fellow writer releases a book and that fellow writer’s book is getting gajillions of accolades and everybody’s talking about how awesome it is. This makes some writers want to just quietly gather their things and go home, put on the TV and lament that they could’ve been a contender, maybe, had that other writer not been so much more awesome.

2. Blurbs on other writers’ sites that say how awesome their books are and your life is a meaningless desert of ennui if you don’t read that author’s work. Meanwhile, the blurb on your site says: “fun read, good to kill some time” or “doesn’t suck.”

3. Parties where it comes up that you’re a writer and someone invariably asks what you write and then says “never heard of it” and adds “should I read it?” To which the writer is stuck. If she says “yes, you must read my work. You’re deprived otherwise.” then she looks kind of like a douchecanoe. But if she says, “oh, I don’t know. If you’d like to, I guess so.” which then makes her look like a sad and shipwrecked douchecanoe. Although, to be fair, there are many, many writers who are brilliant shining lights in literary-land who have never been heard of at some party in a state far away. Hold on to that.

4. As a follow-up, people who say something like, “If you’re published, how come I haven’t heard of you?” Um. Maybe because there are almost 1,000,000 books published in this country every year? Nevertheless, this makes some authors start twitching about not doing enough promo work. 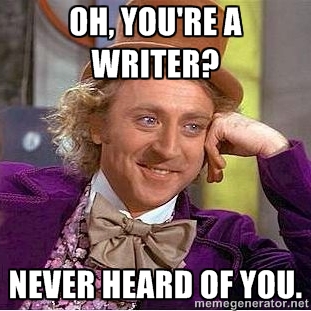 5. As another follow-up, somebody saying something like “how come you can’t make much money if you’ve published that many books?” At this point, you’re better off taking your sad, shipwrecked douchecanoe right into the rapids rather than attempting to explain the vagaries of the publishing world.

6. Reading “how to write” blogs and realizing that you have engaged in every single one of those DON’T DO THIS in terms of craft. At which point the writer feels cold and clammy because the book she’s just about to release has several writing no-nos in it.

7. Bad reviews that somebody forwards to you with the subject line “FYI.” (here is a pep talk blog)

8. A really super-cool cover on another writer’s book. Especially if everybody is talking about how super-cool it is. This causes some writers to immediately scrap all forthcoming covers, go home, turn the TV on, and think how they could’ve been a contender, if only they had awesome covers, too.

9. A really cool promo thing that an author does and it gets everybody talking about that author and that book while you’re still trying to figure out how to get something like “sparkle pony” into your title because you’re sure that’ll sell.

10. Hammering away on a book and you’re about halfway through when you go onto Goodreads and see another book whose plot is pretty similar to yours and you wonder if writing Godzilla into your romance will thus distinguish you from the pack.

Other than that, WRITING IS FUN, people!

Here. In case you needed some Saturday inspiration from the spam-bin:

“hello!,I really like your writing so a lot! proportion we
be in contact extra approximately your post on AOL?
I require an expert on this house to resolve my problem.
May be that is you! Taking a look forward to peer you.”

Cracks me up. Thanks, spammer, for the giggles. Now, please step away from Google translator before you hurt yourself.