Hello, people! Well, as it turns out, my blog is getting a lot of action (ha!) during the Order Up Blog Tour. Which is fine n’ dandy with me.

Today I’m pleased to introduce Jaye Markham, whose story “Not Spam Again!” deals with women in the armed services during World War II in London. 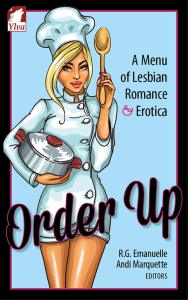 I’m now going to turn this over to Jaye, who will give you some awesome historical (herstorical) background to her story and to the larger issue of women serving in WWII.

When I tell people I worked in a repository of World War II memorabilia, I either get a positive “That sounds cool,” or a question of why am I interested in a war. No, none of my immediate family served, but I’ve been fascinated by that period in our history, especially women’s participation, since my early teens. You see, those millions of women who served in the military for the first time, flew planes, nursed the injured, entertained the troops, served donuts and coffee, worked in factories and shipyards, or other industries, paved the way for women today and helped win the war. And, I’m grateful.

In fact, all the women in the four branches of military service, plus the Army and Navy Nurse Corps, the WASP pilots, the American Red Cross, and USO were volunteers. No draft for the women.

Think about that. Over 357,000 women served in the military branches or the two Nurse Corps, and another 1,074 flew as pilots with the Women’s Airforce Service Pilots (WASP). Thousands more, including nurses, worked in the American Red Cross centers here or overseas, or as “Donut Dollies” in remodeled buses and trucks serving coffee and donuts to the troops.

The United Service Organizations (USO) sent numerous women, along with famous entertainers such as Bob Hope, to bases in the U.S., Europe or the Pacific to entertain the troops. Many more staffed USO clubs in large cities here and abroad. Nearly seven million women joined the work force for the first time, finding jobs in factories, shipyards, and elsewhere, filling in for men off in the military.

At the time of the attack on the U.S. at Pearl Harbor in December 1941, women were expected to be stay-at-home mothers and homemakers, but starting in 1942, millions of women participated in the war efforts and kept our economy going.

Food for the public was rationed during the war and at times items were scarce for the military. The potted meat, Spam, was a staple for many, and is the basis for my story of two members in the Women’s Army Corps who find love in 1944 war-torn London.

Here’s an excerpt from “Not Spam, Again!”

Background to the excerpt: After meeting over the mess serving line, Nan and Marty are still getting to know one another. Recently, they went to the movies at the American Red Cross center and days later Nan is thinking about their time together.

Nan stared at the ceiling of the room she shared with Betty nearly a week after that movie, wondering why she thought more about Marty than any man she’d dated. A knock at the door interrupted her musing.

Nan opened it, and her heart skipped at the sight of Marty. “Hello.”

“Um, certainly.” Nan stepped aside and Marty rushed in.

“Please close the door,” she said, and Nan did.

“I worried you wouldn’t be here and that I’d be caught.”

She unclasped her purse and withdrew two Red Delicious apples. “For you.”
Nan stared. “You remembered.” Before she thought about it, she pulled Marty into a hug. “You’re a sweetheart.”

She kissed Marty’s cheek then pulled away when she realized what she’d done. She chided herself. Women often kissed checks. She cleared her throat. “Thank you. You should have one too.”

“They’re for you. They’re a bit bruised, Cookie was thinking of throwing them away, since there wasn’t enough for a pie.”

“I don’t care. Where’s your knife? We’ll share one now, and I’ll hide the other for another time.”

Marty took her knife out of her purse and cut away the bruises before she sliced it.

“Oh, this is heaven,” Nan said as she bit into a piece. “I can almost forgive having Spam if I got one of these a week.”

Marty laughed and took a bite. “Mmm. Golly, you don’t know what you miss until it’s gone. So how’ve you been? I haven’t had a chance to chat with you.”

“They’ve got us working extra hours. This is the first evening I’ve had free all week. I shouldn’t complain. At least the raids haven’t been as frequent, nor have we run out of coffee.

“Well, you know where to go when you do. Do you have some time now?”

“Once, on a double date.” Nan hesitated. “I didn’t particularly like the pint of bitters.”

“You need to try the lager, according to my roommate.”

“There’s a pub two blocks from here where we can play darts. Please come, it will be fun.”

How could she say no to Marty’s smile? It made her insides glow like a field full of fireflies. “All right.”

“Don’t worry. I’ll keep you out of trouble.”

Nan grabbed her coat. “A little trouble is okay.”

“That’s the spirit.” Marty held the door for her and Nan held her gaze for a long moment, not understanding why she wanted to pull her close and run her fingers through Marty’s hair, and feel her lips—

“Yes.” She locked the door behind them, delighting in Marty’s closeness and how it felt when their hands inadvertently brushed as they went down the stairs. Why didn’t she react this way to a man? Was she one of those women the Army warned about? The kind who like women the way they should like men?

##
Jaye Markham is a pen name for a former feminist bookstore owner and archivist in a repository of World War II memorabilia. She’s been fascinated since her teen years with the Second World War, and especially women’s participation. She has had the privilege of meeting and interviewing members of the WAC, WAVES, Marine Corps Women’s Reserve, SPARS, Army and Navy nurses, WASPS, Red Cross and Home Front workers, and British war brides among others. In addition, she has a story, “Madam Secretary,” in the anthology Hungry for More: Romantic Fantasies for Women (2014)

Author Rebekah Weatherspoon has an excerpt on the Friday post on the Order Up Blog Tour here at Andi’s site. Check it!
The next blog will be here on Andi’s page. And tomorrow, Andi will be posting an excerpt from Emma Weimann’s story here at The Situation Room. So stick around!

Happy Monday, all. See you tomorrow!