I was talking with my colleague, fellow writer/editor/publisher R.G. Emanuelle this morning (and if you have not read her work, her latest is an awesome F/F gothic thriller/mystery).

R.G. and I are co-founders and co-owners of publishing venture Dirt Road Books. We and 4 other authors got together and launched it in 2017. R.G. and I come from traditional publishing back in the day; collectively, we have over 40 years of experience in publishing (omg dinosaurs roaming the earth).

Both of us worked with publishing houses before ebooks, way before the availability of platforms as we know them now, so we’ve been editing and proofing manuscripts in various formats for a while.

Today we were talking about typos and errors that sneak into the final product, and I thought I would offer some thoughts about how and why that happens, and I’ll do a comparison of old-school vs. new-school processes in publishing a manuscript.

Also, it might be valuable for readers who don’t have a background in publishing or editing to understand the amount of work that goes into a manuscript, whether its format is print or ebook, so you understand why books are priced the way they are. Sure, you can say that “ebooks should be priced even lower than they currently are because they’re just electronic files,” but the fact is, the manuscript behind that ebook went through an ass-load of work before it got ebooked. You wouldn’t do a ton of work on contract for a pittance, would you? Or for free? Well, there you go. Just something else to ponder.

Anyway, let’s break this down. END_OF_DOCUMENT_TOKEN_TO_BE_REPLACED

Hi, kids! Hope this past week has treated you well. The usual crazy going on here, but let’s take a moment and chat about something else writing-related.

OMG your blood is pumping, your juices are flowing and you’re just salivating at the mention of the word EDITING. It’s okay. I totally understand.

Anyway, yes, I am a writer but I started professionally editing way back in the early 1990s, during the Dark Ages when starving peasants tilled the soil outside the castle and if you wanted to talk to somebody you had to walk to the other side of the village before dark, because that was when the wolves came out to gnaw on hapless villagers who didn’t fall under the purview of the manor lord’s protection. If not wolves, then witches, werewolves, and vampires.

Shit was scary back in the day.

But now, thanks to technology, we know all that scary shit isn’t on the edge of the village. IT’S ON THE INTERWEBZ. Whew.

Anyway, I worked in publishing for about 15 years, either managing in-house or freelance editing out-of-house. I’m still an editor, and I still keep up with the publishing industry, but I’m a writer, too. Which means I have been on both sides of the fence and I have a certain amount of empathy for both perspectives.

I know what it feels like to be working with an editor who you think is missing the point of your vision, who is crushing your writing dreams by saying a scene doesn’t work, who just might be a cross between a werewolf and a vampire and is merely toying with your emotions before stomping on your ego. I get that. But I also know what it’s like to help a writer realize her vision in clearer, stronger prose so that she goes on to write better prose later and she remains a colleague and works with you many times after that because she trusts you.

That is the essence of an editor-writer relationship. Trust. It’s important to trust that an editor has the professional background and training to work with a writer on craft as well as narrative. On the other side of that, it’s important that an editor trust that a writer is open to edits, is open to realizing that sometimes, a writer is much too close to a project to see clearly, and that a writer wants to improve her craft.

That’s the ideal. So with that in mind, what should you NOT say to an editor with whom you are working?

END_OF_DOCUMENT_TOKEN_TO_BE_REPLACED

Every now and again I ask readers and colleagues what they’d like me to blog about in an upcoming piece. This week, I’m addressing a question that a reader on Facebook posted to my “YO! WHUT SHOULD I BLOG ABOUT?” question.

That question is: “When you edit for others, what do you find most challenging?” Thanks, Joan, for posing that.

I think I’ll answer this question by first explaining a bit about how I edit a project. Once I have the project in my email box (because that’s pretty much how it works these days — if you want a trip down history lane, ask me how to do hardcopy editing), I download it and here’s what happens. . .

Okay, maybe not THAT. Heh. But you never know. Anyway, let’s continue.

END_OF_DOCUMENT_TOKEN_TO_BE_REPLACED

Hi, kids. Since people seem to have been interested in the last post I put up about editing, I thought I’d put this one up, too. This, as well, was previously posted at Women and Words, where I am an administrator.

At any rate, the last post I did here on my site about editing dealt a lot with the PROCESS a manuscript goes through prior to publication. Here, I’ll talk about all the different TYPES of editors you might run across in the publishing world, including those who might call themselves acquiring editors and/or managing editors and things like that. The publishing world involves business, and many editors are thus tied up with the business itself of publishing.

We’re not just mechanics for your manuscript. We are also gatekeepers and observers of what goes on in the publishing world, tracking trends and looking for the next big kind of genre that people might want to buy. Literary agents are often editors, too. They have to be. They’re assessing manuscripts and thinking about how to get that manuscript the best placement possible. They’re looking for manuscripts that might be trendy, but with new and interesting twists. And they’re also looking for the Next Big Thing, whatever that might be. 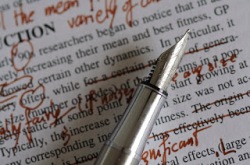 So yes, the nuts and bolts of actually editing a manuscript are important. But there are all kinds of other things at play, too, and these are tied to the publishing world and to the business. So let’s go have a look.

EDITING ROCKS! Read on to see why.

END_OF_DOCUMENT_TOKEN_TO_BE_REPLACED

This is a post I did on the different kinds of editors and how they figure in publishing. Someone recently found it and pinged it, saying it was “useful.” So I figured I’d pass it along to you.

So let’s go find out about the editing process, one of the mysteries of publishing.

END_OF_DOCUMENT_TOKEN_TO_BE_REPLACED

I did a post over at Women and Words on some funny stuff — worst book covers, worst album covers, worst books — and that led me to actually want to post one of those worst covers I really enjoyed. Here it is:

You so know you want to read on…

END_OF_DOCUMENT_TOKEN_TO_BE_REPLACED

I know, I know. Everybody’s rushing around for the holidays, gettin’ crazy. That’s fine. I hope everyone maintains their sanity and stays safe.

Okay, just to point you to a few things that you might find groovy. I do blogs over at Women and Words now and again that deal with the business of publishing for readers. That is, readers who might be curious about what goes on in the bowels of the industry.

Here’s one on royalties.
And here’s another on the editing process a manuscript goes through.

There you go. Don’t want to keep you too long. More randomness tomorrow, I think.

Editing tips can actually help you recognize not-so-great stuff in your writing so you can make it better. Dustin Wax says that learning to edit can help you write better. 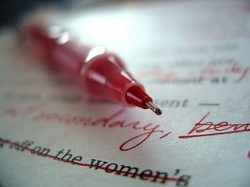 QUOTE:
The best writers know differently, of course — their memoirs and biographies and writing manuals are filled with stories of books that needed to be cut in half to be readable, sentences that took weeks or months to get just right, and lifetimes spent tinkering with a single work that never strikes them as “just right”. To paraphrase a common saying among writers, there is no good writing, only good re-writing.

But if writing isn’t taught well enough or often enough these days, editing is hardly taught at all. This is too bad, since editing is where the real work of writing is at. More than just proofreading, good editing improves the clarity and forcefulness of a piece.

One of those tips, which I find particularly useful for writing better dialogue, is reading out loud. Wax also recommends reading in reverse. And CUT, don’t add. Another of my faves, get rid of adverbs.